Mount Olive Missionary Baptist Church was founded in 1860. The late Burton, Adeline and Katie Moore Jones provided the land for this church. Mount Olive was once located behind its present location, 118 Johnson Street, Fayetteville, NC. The original structure was wood and shutters covered the windows. Since the early church was without electricity, one of the members brought his personal oil lamp so that the evening services could be conducted.

The community was often reminded that it was time to come to worship or there was something important that they needed to know by the ringing of a farm bell.  The bell was positioned between two oak trees in the front yard of the church.  Brother Joe Rogers Williams helped ring this bell.

Rev. Sandy McDonald was called to Mount Olive after Rev. McNair. Under his leadership the Pastor’s Aide club was organized, brick veneer was added to the church, and the first piano was purchased. During this period, our church pews were bench-style with backs. Rev. McDonald had four deacons who served with him: Deacons Daymon George, Rowland McNeill, William Maynor, and Peter Clark.

Rev. Julius Butler came to Mount Olive, while attending the Seminary at Shaw University. He promoted our Music Department and later recommended that we purchase some used seats to supplement those we had.

In 1951, Rev. James Everett was called to Mount Olive. He pastored until 1973. During his pastorate he continued to promote the Music Department and under his leadership, a Senior Choir was formed. During this time five deacons were added to the Deacon Board. They were: Deacons Charlie Smith, John W. Jones, Joe Henry Gilmore, Earl McNeill, George Green, and Sasser Vereen.  Under his leadership, we purchased new furniture, central heating, air conditioning, an organ, a piano, and a sound system.  In addition, a baptismal pool was installed, rest rooms were added and the dining room was built.  Carpet was later added to the church and shrubbery and walkways were also added.

On April 14, 1974, Rev. (Dr.) Maurice B. Hayes was called as pastor of Mount Olive. Upon his arrival, Rev. Hayes found plans in the making to build a new church on a new site that would accommodate a growing congregation. The idea for the building and its location was developed in the mind of Jason W. Jones, who left as a patrimony a parcel of land adequate for such a building, with extra space to facilitate other needs. Rev. Hayes instituted a program whereby the youth served in many capacities. A Young Adult Choir was organized and a Children’s Call was conducted each Sunday Morning for ages one to nine. Bible stories were read and they were encouraged to talk about Jesus. Pastor Hayes took leadership in many areas of God’s work and encouraged members to tithe as commanded by God.

After the resignation of Rev. Hayes, Rev. Edward Jones was called as pastor and served until the second Sunday in October 1978. Following him, Rev. Ronald Swain served as interim Pastor until the fourth Sunday in November 1979.

Rev. Perry B. Irby served as interim pastor from December 1979 until January 1980 and was installed as Pastor in February 1980. Rev. Irby left Mount Olive on September 23, 1984 for a new calling as a Chaplain in the U.S. Air Force. During his tenure the present sanctuary was constructed in 1982. Under his leadership, the following organizations were formed: Christian Education Department, Mass Choir, Bible Study Class, Youth Department, Nursery Department, Bus Ministry, Budget Committee, Hospitality Committee, Deacons and Minister Wives Group, Community Missionary Circles, New Members Orientation, and the Church Sports Program. The Gospel Choir was re-organized and the first women trustees were appointed to the Board of Trustees.  As the congregation began to grow, Rev. Irby saw a need for an 8:30 a.m. service, which was started under his leadership. The following ministers were licensed during Rev. Irby’s tenure as pastor: Reverends: Carl E. Brinkley, Jr., James Scruggs, Johnnie Stowe, and Wilfred McQueen. The Board of Deacons was enlarged with the ordination of the following Deacons: Failus Potts, Jospehus Gilmore, and Martel Jones.  The following females were appointed to the Board of Trustees: Sisters Stella Boykin, Valerie Jones Russ, Erie Bell, Arnetta Gore, and Willie Ann Gillis.

Our present Pastor, Rev. (Dr.) Carl E. Brinkley, Jr., served as interim Pastor from October 1984 until March 1985, at which time he was installed as pastor of Mount Olive. Many organizations and activities have been enhanced during his tenure. There are three worship services to accommodate the growing congregation, 8:00 a.m., 10:00 a.m., and 12:00 p.m. There are three Sunday School Services: 7:00 a.m., 9:00 a.m., and 11:00 a.m. The early morning services are now broadcast live each Sunday from 8:30 a.m. until 9:30a.m. as the outreach ministry program. The Administration/Classroom wing was added in 1985. The Music Department has grown to five full choirs with a staff consisting of a Minister of Music and a Director of Music and several associate musicians. The Missionary Department has been re-organized to include a Young Adult Missionary Group, Bereavement Missionary Group and Senior Members Missionary Group.The Christian Education Department has a full time director and has added a tutorial program to assist student in the church and community. The CED Department has also added teacher certification classes for potential Church teachers.  A full time Maintenance Technician has been added to maintain the church property and grounds. The Laymen League is fully active. A Tape Ministry was developed to provide those members who are sick/shut-in and serving with the armed forces overseas with audiotapes. The church now has a summer and fall revival. The Children Church Ministry conducts a full service during the 10:00 a.m. service and the 12:00 p.m. service. The Nursery is also open during the 10:00 a.m. service and 12:00 p.m. service. Several other ministries have been implemented under Rev. Brinkley’s leadership, Singles, Couples, and Seniors Ministries. A Security Ministry was also added to facilitate parking for our members and safe keeping of the grounds.

A full-time administrative assistant and secretary/bookkeeper was added to the Mount Olives’ administration staff. The Church Office is open Monday Thru Friday. Rev. Brinkley has also instituted the financial envelope system. A new computer system and software were also purchased to upgrade the automation requirements of the church. Rev. Brinkley continues to teach tithing and has established a method in which 10% of the total budget is given in support of schools and missions.

In 1993, the church mortgage was retired, Vans were also purchased to provide transportation for church members and support the church’s travel requirements. Audio/video, and automation equipment was purchased to enhance the Christian Education training program. A summer reading enrichment program has also been added to the summer schedule.  A closed circuit video system has been installed to accommodate the overflow in the chapel area, fellowship hall and nursery area, and to provide videotapes as part of the tape ministry. The interior of the church has been renovated with new paint, carpet, chairs, paneling and floor tiles. 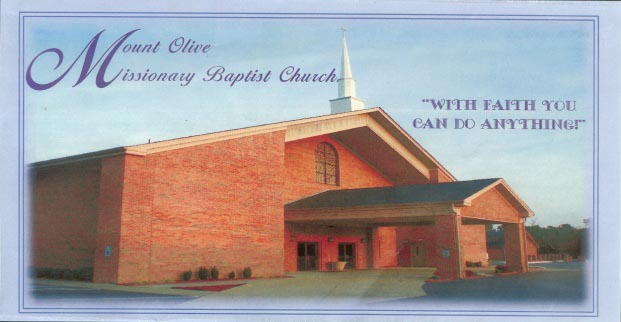 In 1996, God gave Rev. Brinkley a vision of building a new facility to accommodate a growing congregation. In May 1996, the church purchased 10.4 acres of land on Johnson Street. In March 1997, God blessed us with the opportunity to purchase another 10 acres of land adjacent to the 10 acres we own. Rev. Brinkley also established a building steering committee consisting of seven groups of ten members to design, develop and plan the new facility.  In 1997, the church began a Stewardship Capital Campaign to raise funds for the new facility from within.  In 1999 and 2000 two additional vans were added to the vehicle fleet bringing the total to fours van available to support the Van Ministry Mission of the church.  In April 2000, the church purchased 2.1 acres of property, which contained a refurbished home. This home was converted into a Child Care Center, which is another level of the Pastors’ vision of growth and support for the community.  In March 1999, Mr. Kenneth Martin and John S. Clark Construction Company was hired to design and construct the new sanctuary, on the present site. The Stewardship Capital Campaign has been extended to September 2004. On March 18th, 2001 a groundbreaking ceremony was held for the construction of a new 2.6 million-dollar sanctuary.  The MOMBC Child Development Center was also dedicated and opened.

On June 23rd, 2002, Pastor Brinkley led the congregation into a new sanctuary and facility.  The guest speakers for the dedication of the new facility were: Chaplin (LTC, USAF) Perry B. Irby (former Pastor of Mt. Olive), Rev (Dr.) Sidney Lock (Pastor of the Cornerstone Missionary Baptist Church, Greenville, NC) and Rev. (Dr.) John D. Fuller, Sr., (Pastor of Lewis Chapel Missionary Baptist Church, Fayetteville NC and President of the General State Baptist Convention.  The church conducted two worship services on Sunday (7:30 AM and 10:30 AM). The former sanctuary was converted into a Multipurpose Room to support the other ministries of the church.

The Pastor’s vision has led the church to acquire more property (land and real-estate), a Clothing Boutique and Food Pantry was opened to support the community and the outreach ministry.  Several of the purchased buildings which have been converted into Thrift Shop, Ministerial Training Building, School Community Interaction Program Building (SCIP), Counseling Centers, Health Center, Scout Buildings also an additional Child Center to support other age groups.  On September 8th, 2003 another part of the Vision was completed when the Mt. Olive worship service was televised on Channel – 9 (PAX) from 7:30 AM to 8:00 AM each Monday morning. In 2004, Three Specialty Ministers were added as part-time staff members, those specialties are: Counseling Ministry, Visitation Ministry and Vision Development Ministry.  Also a new Missionary Support Group (MG# 12, Military Support) has been added to the missionary department. The Church Vision has been expanded with the addition of the School of The Prophets which was developed to train ministers in their outreach ministries.  The church is also in the Transformation 2005 mode, which will bring the ministries of the church in line with the Nehemiah Process as the base. Each ministry is represented by a pillar for a total of seven pillars which represent the following ministries: Working His Works, Economic Empowerment, School of the Prophets, Nehemiah Process, Godly Leadership, Tightening the Nets, and Building for Ministry.  Each ministry is also represented by colored rings which are connected one with another. The connection of these ring signify that there is no beginning or end and that being joined there is strength in unity. The purpose of Transformation 2005 is that the leadership of the church will be trained to minister to the congregation and take them to a higher level of ministry.